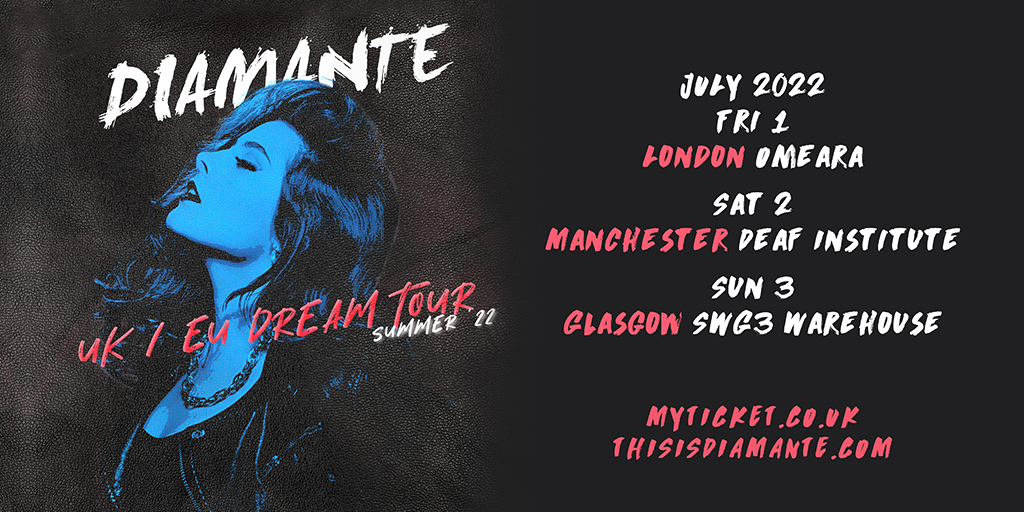 Diamante knows what it means to truly shine. With iridescent sapphire hair, a show-stopping voice, runway-ready fashion swagger, and an empowering message, the Boston-raised and Los Angeles-based Mexican-Italian-American siren brings a new (and blue) fire to rock and alternative music.

Diamante spent her teenage years cutting her teeth at local gigs on the Sunset Strip to become the powerhouse performer she is today. A disciple of both P!nk and Guns N' Roses who doesn’t fall into rockstar excess or even sport tattoos, she devoted every waking minute to honing a signature “hard rock sound with a modern alternative edge.”

After extensive touring with bands like Breaking Benjamin, Three Days Grace, and Shinedown… Diamante is in full force shining brighter than ever before. In 2019, Diamante teamed up as an independent artist with Howard Benson and Neil Sanderson to make her sophomore album, American Dream. Diamante capitalized on her newfound ultimate creative freedom and independence by being her own CEO throughout every facet of the album process. On working with Benson and Sanderson, Diamante praises that they were instrumental in “bringing my stories to life and pushing me to embrace my vulnerabilities”. American Dream shows exponential growth, proving now more than ever that Diamante’s fearlessness to bear her soul in her music is what truly sets her apart.