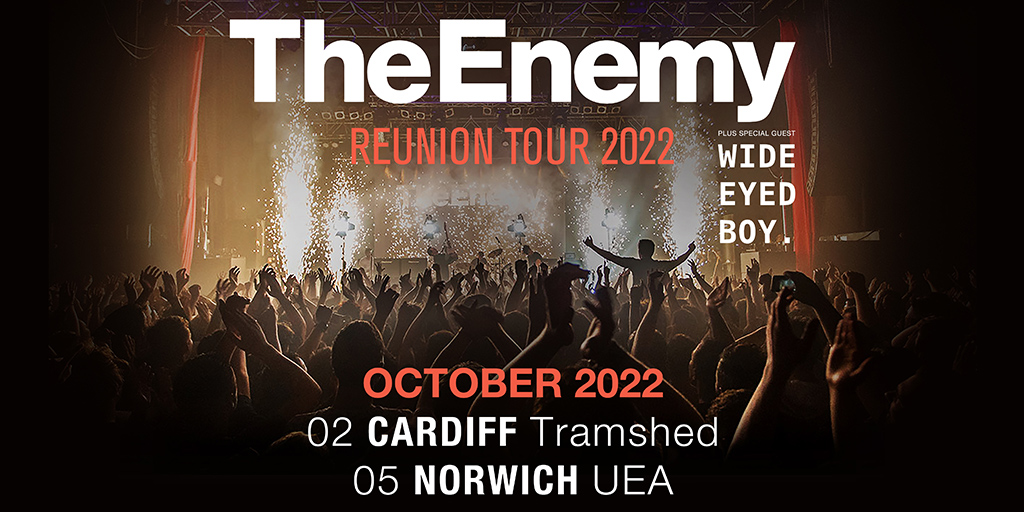 In 2007, The Enemy emerged from their working class roots in Coventry to become one of the biggest new bands around. Their debut album ‘We’ll Live And Die In These Towns’ went straight to #1 and would later be certified Platinum in recognition of over 300,000 sales. The trio would ultimately land another two Top 10 albums, two Top 10 singles, three major awards (from NME, Q and XFM), shows with The Rolling Stones, The Sex Pistols, Oasis, The Killers, Kasabian, Bon Jovi, Manic Street Preachers and Stereophonics, and even complete a special rooftop performance at Wembley Stadium ahead of the FA Cup Final.

Now as the 15th anniversary of the album’s release approaches, The Enemy announce a major UK reunion tour for 2022. The tour features the band’s original and only line-up - Tom Clarke (vocals/guitar), Andy Hopkins (bass) and Liam Watts (drums) - and represents the first chance for fans to see the band in action since they played three sold-out farewell shows in their hometown back in 2016.

The Enemy commented, “2022 marks the 15th anniversary of ‘We'll Live And Die In These Towns’ and six years since we all played together. Over the last decade-and-a-half we've watched fans begin to really treasure those songs and we're asked on an almost daily basis if there is any chance of the three of us getting back on stage together, so we know how much this will mean to the fans. What we weren't expecting was quite how excited we would all be to play together again. There's a lot of anticipation and excitement from the three of us to go out and play, just us, the songs and the fans. We really can't wait!”