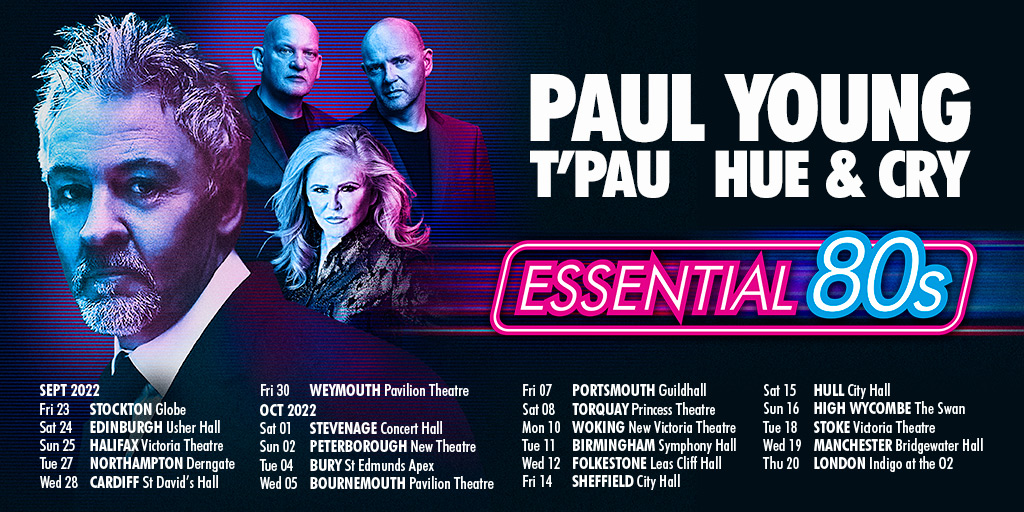 The decade of fun and flamboyancy, the era of music videos, the 12 inch, compilation CD’s and some of the most enduring popstars in the world! Essential 80’s brings the very best live compilation of chart topping 80’s artists to the stage September 2022 for a nostalgic tour of everyone’s favourites!

80’s heart throb Paul Young, shot to fame with his much loved album No Parlez’ followed by a steam of top 10 hits such as Wherever I Lay My Hat, which hit the number 1 slot in 1983 Love of The Common People, Everytime You Go Away’ & Everything Must Change.  He is also a Brit Award winner for Best Male vocalist, sings the opening lines on the original Band Aid Single Feed The World and performed at Live Aid in 1984. Well known as a loyal & loving family man Paul is also a keen chef, biker and fan of all things Mexicana!

Carol Decker of T’Pau, broke hearts with her powerful vocals on huge hits  such as China in Your Hands  (Number 1 for 5 weeks in the Official Uk Top 40) and the uniquely arranged Heart and Soul their debut single that reached number 4 . The flame haired songstress became a teen icon in the 80’s for many a young girl who aspired to be like her! Their 1987 album Bridge of Spies is as synonymous with the 80’s as Carol’s trend setting pineapple hair do!

Scottish duo Hue & Cry were a force majeure with their high energy hit Labour Of Love. The band consistently skirted around the top 20 throughout the 80s, their seminal Hue and Cry album Remote, was released to not only huge acclaim but to multi-platinum success, spawning the singles ‘Ordinary Angel’, ‘Violently’ and ‘Looking for Linda’.